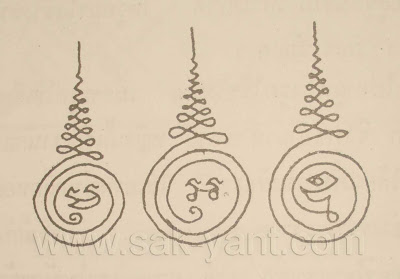 Maha Rud Noi is actually better said to be a “Sacred na” design more than a yant, and is the smaller abbreviated version of yant Maha Rud Yai ( Noi means small and Yai means big in Thai language). In principle both Na and Yant are basically the same, except that the na, apart from being smaller, contain the five principal constituants of the na design (pintu, tanta, peta, angku and sira), which i explain in the 108 na section. Originally, Maha Rud Noi and Yai were created and intended to be inscribed on paper or metal plate for rolling into a tagrud amulet, but as is the case with many sacred yant, they can also be tattooed (although not all Masters will agree to all designs, so don’t take this for granted.. it depends on the Master).

The kata for Yant Maharud Noi is ;

The word “Rud” means to rub or swipe/sweep. It is not for no reason that this word is used in the name of the yant; When the yant is made into an amulet, tagrud, yant cloth or paper yant, then it is to be rubbed on the skin to acheive the desired effect of the spell. depending on your intended goal, there are different places where you should rub the skin with the amulet. For ,meetings with high society, powerful peers and noblemen, you should rub your right side 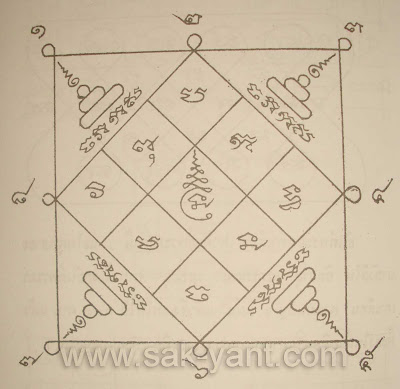 For making a lady fall in love with you, then you should rub the amulet or yant design on the left side of your body.

To do away with your enemies then rub your forehead and chest with it, and to prevent demons from bothering you should rub it on your back. If someone is angry with you then write the person’s name in the yant and soak it in perfumed prayer oil whilst chanting the kata into it, and rub it on your skin; the enemy will lose his anger with you, and like you. If your eyes hurt, then you should soak the amulet or yant in water and chant, and then use the water as eye drops.

The Kata for Yant Maharud Yai is ;