Origins of Yantra and the tattooing of Sak Yant

In the time of Ayuttaya period, as far back, perhaps as King Somdej Pra Boroma Thrai Lokenaat, Government officials and civil servants were tattooed on their wrists with Yant in order to display their status.in Thailand, Sak Yant can be traced back to the Ayuttaya period, and there has been documentation discovered mentioning it in the Sukhothai Era. but the Sacred Yant designs have existed since long before the tradition of tattooing them arose. 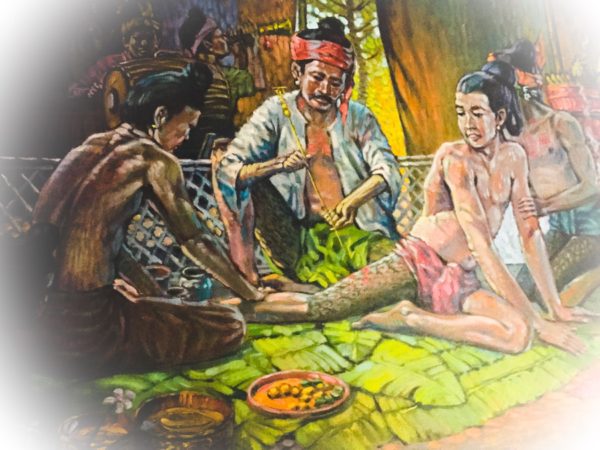 The legends tend to indicate that the Ruesi were cheifly responsible for obtaining the spells and sacred psalms that enable the magic of sak yant. They did this through having supposedly entered their states of higher consciousness and listened tothe Divine beings.The Ruesi recorded the songs of the Heavenly beings and out of this came the “Kampir Waet”, otherwise known as the Sacred Vedas by the Hindus. These Vedas were the sacred book of knowledge of the Brahmins, or “Prahm” as they are called in Thai.
Before the advent of Buddhism, Brahminism was the main Religion & Brahmins were the ruling society of what is now India and Nepal. The only people allowed to study the magickal knowledge contained within the Vedas.The Ruesi took this knowledge, and made it available to us on Earth.They then made hymns to the Divine beings using these Vedas and inscribed Yantras, sacred geometrical imagery with magickal powers cast into them.
After their invention and the rise of Buddhism in what is now known as the Kingdom of Thailand, the Thai people developed an affinity for tattooing these sacred Yant (Yant is the Thai name for Yantra). Most men in most villages would be tattooed to their elbows and knees at least.Shirt like and short trouser like intricate tattoos made with a series of dots made close together as to be able to define shapes and forms in a highly detailed manner. These tattoos were worn by warriors of the past, and even in the first and second world wars the Thais were known as “Taharn Phii”  (ghost soldiers) because of their many protective tattoos and amulets worn.The soldiers would even wear a”Suea yant”.

Suea yant is a shirt made of linen cloth with Yant, sacred Na, Himapant Animals and Divinities inscribed on it’s surface.As the Khmer kingdom was extremely respected by the Thais for their sorcery and Magick spells, spells written in Pali using a Khmer version of Sanskrit lettering.

This lettering is known as “Agkara Khom”, or”Khom”.As to the origins of the designs, it is unclear as to where they came from, but it is sure that “Yantra” were existent long before the time of Buddhism, and that the Ruesi played a probable large part in the creation of the Yant and their “Kata” (mantras). The Suea Yant on the picture left, was made and blessed in Wat Boworn.

The Sacred Yantra of Vedic Brahman Tradition are older in origin than Thai Buddhist Yantra, but it could be logical to assume, that the use of Sacred Geometry in the form of Yantra must have derived from, or be influenced by the Vedic Sacred geometry. What is slightly mysterious however, is that when we consider the fact that Brahman presence in Thailand and in Khmer Kingdom was evident, the Design factors of Vedic Yantra are hardly noticeable in Thai Yantra. 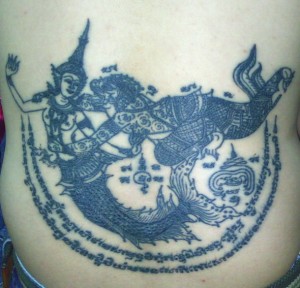 Sak Yant Hanuman Jab Suwanamajchaa – Hanuman catches Nang Suwannamajchaa under the water and takes her for his wife.. the result was a son – the fishtailed monkey “Majchaanu” (notice that his name is a mix of the names of his mother and father Suwannamajchaa and Hanuman -Majchaa means fish in Pali Suwannamajchaa is of course a mermaid.

Many designs and  God forms used in Sak Yant tattooing are taken from the “Ramakian” or, Ramakien – the Ramakian is the Thai version of the Indian Hindu epic “Ramayana”. The Devas and Mythological Himapant animals seen tattooed as yant are characters fromthis legend. Hanuman, the monkey general, Phra Ram (rama) the incarnation of  Vishnu, Lady Siidaa (Sita),who is the consort of Rama and also the avatar of Pra Lakshmi. Garuda ,or  “Payaa Krut”, in Thai, is the winged bird man, protector of Thailand,e and also the sacred vehicle of Vishnu narayan, are often seen tattooed as sak yant.

This would give an age of at least 3000 years to the Yant. It is not evident, however, that it was a custom in those days to tattoo them -it seems to have become a tradition to tattoo the Yant only since Buddhism came to Thailand, and the Thais began applying the Yantra as tattooed.Hindu India does not seem to have been inclined to tattoo the Yantras (although people do get lucky symbols tattooed in India), whereas Thailand has had a tattooing tradition since centuries, which seems to be the reason for the fact that Sak Yant exists in Thailand,but not India, where the Yant originally came from before becoming adapted by the Khmers, Burmese & Thais as tattoos.

Of course, different masters throughout the ages have developed to and added Yant designs of their own “making”. It is considered that no Yant is really invented by a human, rather that all Yant exist and that their structure is a cosmic principle that was there from the beginning.The Yant is just “uncovered” by the master in this dimension. What anthropological reasons there may be for one Culture adopting the tattooing of it’s sacred symbols, and another not, eludes the author still. The only reason evident to the author is maybe the fact that Thais have always had an affinity for tattooing themselves, and may be the constant warring of Clans in those times caused the need for magical protection, and thus did the Yant begin to be applied onto the skin as tattoos.