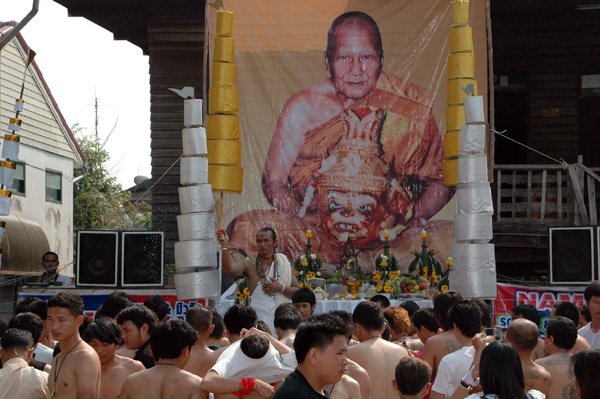 Wai Kroo, means to pay respects to the teacher/master. The Wai Kroo ceremony in Thailand’s Buddhist Culture is many centuries old, and is celebrated in various manners depending on the kind of Master. Most Sak Yant Wai Kroo ceremonies do not just pay respects to the living Master who makes the tattoos; normally the ceremony will incorporate the ceremony of Krorb Kroo (laying on of the Ruesi head – normally a representation of Por Gae Ruesi, but sometimes other Ruesi are also used). 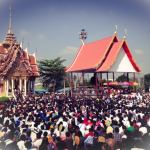 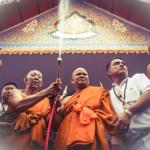 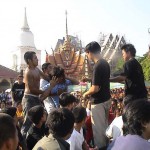 The word Kroo means teacher (the sanskrit word Guru comes from Kuru, which in Thai has been shortened to “Kroo”).Wai Kroo is an ancient and extremely complex ceremony, each ceremony differing according to the office being celebrated (e.g. teacher, dancer, artist, musician, magician, ruesi etc).Each different artistic or trade orientated profession has it’s official “Kroo” (normally a ruesi or deity). Everything must be prepared according to a set of stringent rules.

Korb Kroo – Initiation Ceremony of the Lersi Mask for Protection

Wai Kroo is always preceded by the Korb Kroo Ceremony to Invoke the Lersi Hermit Gods to watch over and protect the Initiate from the effects of Spirits and Black Magick.

On Master Day at Wat bang Pra Temple, up to 10 thousand devotees are present to attend the ceremony of “Krob Kroo” and the subsequent spraying of “nam Monthr” (holy blessed water) and chanting of katas in the court of the temple enclave. the “Krob Kroo ceremony” is prior to the water blessing (which is distributed using a high powered water hose these days,, due to the massive amount of people in the crowd). Krob Kroo is the laying on of the Ruesi Head/Mask onto the head of the Disciple, to bless him/her and protect from any dangers or ill fortune. The “Ruesi” head (called “Sian Ruesi” in Thai), represents the Ancient masters who passed the knowledge down from teacher guru (guru is the root word for “kroo” whjich \comes from Kuru, meaning “Teacher). It is believed essential for anyone practising magic or recieving Buddha Magic/sak yant, to enter the lineage and protection of the kroo. 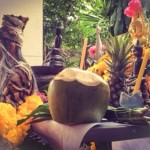 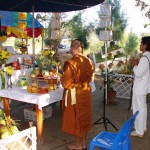 The altar is dressed with the traditional offerings for Wai Kroo to the Buddha, the Devas, and the 108 Lers. 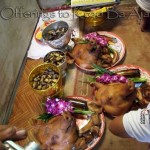 Traditional Ceremonial Offerings to the Devas and Por Gae; Lersi – This particular combination is more intended for offerings to the Kroo of Saiyasart (Occult Sciences) than to the Buddha, who should not really be offered Pigs Heads. 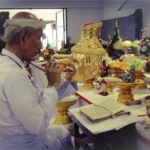 Offerings and Prayers to the Kroo are performed by the chanting of the Ongorn Wai Kroo of ancient Vedic Lore. 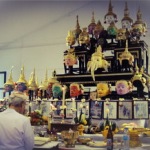 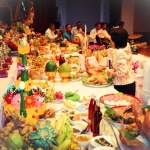 Krueang Sawey – Offerings for the Altar on Wai Kroo Ceremonies.

This is the Traditional set of offerings necessary when wishing to recieve Pitii Rap Khan Haa – it is also used in most Wai Kroo ceremonies. Obtain a bowl made of either bronze, brass, silver or gold if you can afford it, or if finances are low then an aluminium one may suffice.
Make 5 “gruay” (the cone shaped containers for the offerings).Make them from Bai Thong (banana leaf), and place the following in each of the five cones;

One lotus flower (not yet opened it’s flower), Khaw Thorg (puffed rice), betel nut (one piece Pluu leaf (one leaf rolled into a cone) a leaf used in a concoction with cement when eating betel nut), Yaasen (tobacco like product), one candle & one incense stick. Take a piece of red and a piece of white cloth and place in the bottom of the bowl (if the bowl has a stand too then it is optimal), place the five cones with their contents in the bowl along with money from 6 baht upwards. It is believed that the making of this offering will cause the kroo (guru) to enter the bowl and remain there during the ceremony and bestow nlessings and good fortune on the devotees (all present) (N.B. this is just a general info on traditional form of offerings – some Masters may differ in their Ceremonial methods.)

All Wai Kroo Ceremonies even those performed at home by yourself, to revere the Lersi Hermit Gods and beseech Blessings, require the chanting of the Kata Wai Kroo 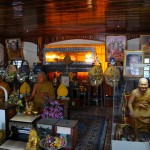 The Mummy of Luang Por Phern inside the Kuti at Wat Bang Pra – all devotees must first pay respects here before any Sak Yant. Afterwards is also necessary to visit his Presence and ask for Blessings 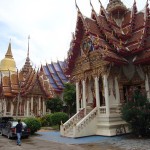 Wat bang Pra Temple Vihara Shrine – this shrine is to your right when you enter the temple, just in front of the mausoleum and the Uposadha Chapel. 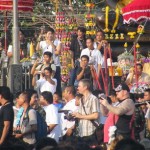 Crowds during the Master Day Ceremony at Wat bang Pra 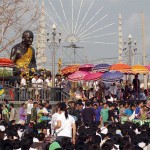 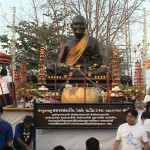 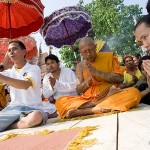 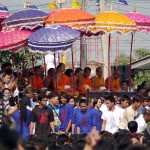 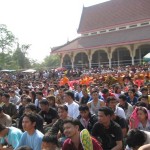 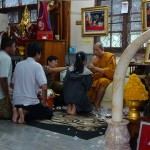 Inside one of the Kuti in the Samnak of onoe of the Monks, at Wat Bang Pra 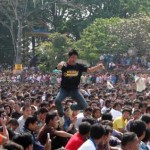