Khong Khuen is a phenomenon that remains to all but the Initiated, unexplained to this day.

Khong Khuen (meaning “magical force rising”), occurs when devotees recieve a mantra blessing or undergo sak yant. Upon hearing the Kata (mantra) of the master, the devotee enters a trance state, which has various forms of  expressing itself.The different apparitions of this trance are thought to be emanations of the Himapant animals of legend and apparitions of divine beings, such as Hanuman and the Ruesi Por Gae Dta Fai.

Khong Khuen is a form of Spiritual Rapture in which various apparitions can take the stage, and the Devotee enters a Trance which they are in most cases aware of, but are powerless to resist, and can only watch on as silent observers as their bodies perform a variety of ancient re-enactments of events displayed as a kind of otherworldly dance ritual. Khong Khuen can be caused by various things, be it Faith, Karma rising up, Possession by a Ghost or Demon, Black Magic arising, or even Mediumship with a Deity. 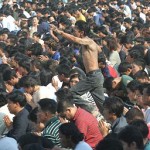 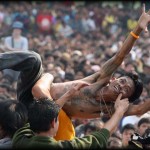 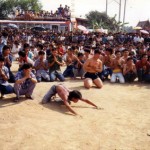 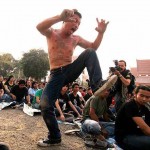 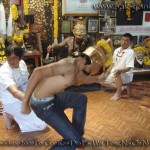 Khong Khuen! a devotee enters trance and is possessed by the Lersi Por Gae during Wai Kroo as he was bestowed the laying on of the Lersi Mask 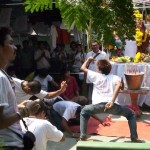 Looksit enter in trance (Khong Khuen), as Por Gae makes signs of appearing. Although they look perhaps aggressive they never attack anybody.


Sometimes seemingly violent thrashing movements, Jumping, running and screaming with hands outstretched clawing at the air like a tiger or even squealing like a wild boar. Sometimes the devotee crawls or slithers on the floor like a snake, or alligator. More serene is the aspect of the Hongsa (swan).

When asked about what Khong Khuen feels like, the devotees answer in 2 different ways; 1. they don’t remember anything, and 2. they know what is happening, but cannot do anything against it.. as if they were a silent observer, powerless to act.

The Buddhist interpretation of the phenomenon is that of “Píti” Piti is a kind of indescribable experience, as a result of either great faith or diligent practise in meditation (be it Vipassana, or Samatha, the same). Beeti has 5 different categories, one or more of which fits the description of Khong Khuen.
Please read more about Piti on wikipedia here; Piti