Wat Bang Phra Temple in Nakorn Chaisri, is the Mecca of Sak Yant Tattooing where thousands of devotees go for tattoos daily – The Great Master Luang Por Phern has been the Guru of the Wicha which has slowly developed a widespread International Following, and become the largest Temple where Sak yant tattooing is practiced in the World. 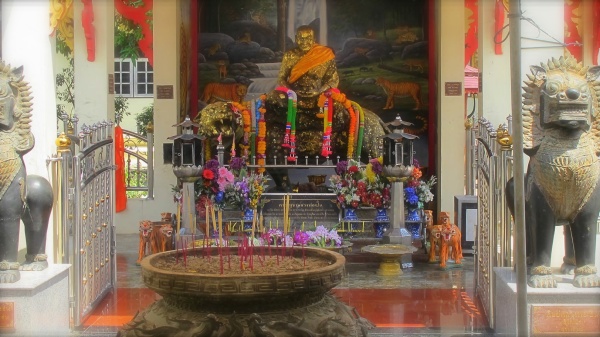 Above Pic; The statue of the Master Monk Phra Udom Prachaanaat, or more lovingly known as  “Hlwong Por Phern Tithakunoe”, surrounded by soldiers and local faithful devotees in order to protect the dais and the monks who will be on the dais from the devotees in trance who shall run towards the statue in hordes when the master chants the “Kata Hua Jai” (heart mantras) of the different Devas and Himapant animals that are tattooed on the skins of the devotees.

Wat Bang Pra Temple is maybe the most renowned place for the tattooing of Sak Yant tattoos.The temple developed its’ fame for such a phenomenon in the years that it was presided over by the great master, the reverend Hlwong Por Phern Tithakunnoe, whose “leaping tiger” tattoo and “Gao Yord” has been tattooed on devotees from various continents. L.P.Phern was the eighth Abbot of Wat Bang Pra temple, presiding over the place from 2517 to the day of his passing away in 2555(actually there was already some sak Yant tattooing occurring before his arrival as Abbot, but the temple did not enjoy any special fame for the matter at that time).

This temple is maybe the main reason that Sak Yant has become such an Internationally known and sought after phenomenon, due to the fact that most foreigners who have received sak yant over the years, have received them from this temple. This is due to the fact that most guides and taxi drivers would think of Wat Bang Pra before any other place, as Wat Bang Pra is immensely more famous and prominent in the minds of Thai people when one coins the phrase “sak yant” or “temple tattoo”. Ask any taxi driver where to get a Temple tattoo, and you will have perhaps a 90 percent chance that they will take you to “Wat Hlwong Por Phern” (common name for Wat Bang Pra).

If you go to the temple these days, you will certainly see many Westerners attending and receiving Sak Yant in the various tattooing salons in the temple enclave. If you decide to go for one, as a first tattoo, you will most probably receive the famous “Gao Yord” tattoo on the nape of the neck or between the shoulder blades if you do not wish to have your tattoo visible to others. You can also opt to get an “Invisible tattoo” using sacred blessed oil instead of ink.

There are of course certain Ceremonial traditions presiding when it comes to receiving a Sak Yant
tattoo; You should be informed as to temple etiquette, as well as the correct manner in which to approach the Ajarn, pay reverence and make offerings to him. There are also a series of rules and moral vows which are supposed to be kept by the wearer of the tattoo, which are meant to help in ensuring the effectiveness of the magical properties believed to accompany the Sak Yant tattoo. The rules differ from temple to temple, but in general most of them include the five precepts as their main rules, along with various other special rules depending on each Master.

1. Do not be adulterous.

2. Do not Duck under a Washing Line, or an overhanging building.

3. Do not cross under a banana tree of the Dtaanii variety.

4. Do not eat star fruit, bitter gourd, pumpkin or any other gourd type vegetable.

5. Do not brush against the skirt of a woman who is menstruating.

7. Do not shout at or disdain your Father and Mother.

8. Do not walk under a single-head bridge or any bridge over water which has dried up.

9. If you eat a banana, then you must not bite it; Break the banana into bite sized pieces and put them
in your mouth

10. Do not have sex with a menstruating woman.

11. Do not sit on a Ceramic Urn (Common in Thailand).Especially a Cracked, or Broken one.
12. Do not eat food from a Wedding, or Funeral banquet.

Since the Passing of the Great Master LP Phern, the tradition has by no means faded, with at least a doozen resident Ajarn performing Sak Yant, mostly Bhikkhus (Monks) and some Prahm Ajarn (Brahman laymasters).
Amongst the most heralded are Luang Pi Dtik, Luang Pi Nan, Luang Pi Ya, Luang Pi Phaew, and Luang Pi Toy, although each and every one of the various Ajarns have their own following and personal Looksit.

Hygiene is more or less the same in all places. The ‘mai Sak” (alternatively called “Khem Sak”, are not sterilized using any kind of modern sterilizing equipment ; the sticks/needles are used repeatedly with only a simple placing of the sticks in a bottle of alcohol to remain there until the next use.Most masters have a collection of five to twenty Mai Sak (or ‘Khem Sak’) arranged in rows, their tips soaking in alcohol in a glass bottles.This means that a single tattoo stick may have from between half an hour to one hour time period between tattooing sessions to kill any bacteria that may still be there from the previous devotee. The tips/needles are not cleaned thoroughly either, receiving at most a quick flush in a bucket of water, the master holding the stick and stirring the needle in the bucket before flicking it in the air to remove excess water/ink and then placing the stick in the bottle of alcohol.

Some masters don’t even have the bottle of alcohol, just placing the needle back on it’s stand/shelf to await the next use.Transmission of aids is therefore a possibility, although there are no official recorded cases of a person contracting aids as the result of receiving sak yant (as far as the author knows).Hepatitis B and C,however, are a real danger, due to the fact that 0.04 of a thousandth of a liter of hepatitis infected blood is enough to transmit the disease. Hepatitis in such an amount of dried blood can survive on a dry surface for up to three months, in a wet environment (such as a sak yant needle), it can thrive.

The author is an experienced professional tattooist trained by a micro surgeon in cross-contamination prevention techniques. He has repeatedly approached various masters about this matter and suggested the use of autoclave or dry heat sterilizers being used to protect the health of the devotees. He has received nothing but negative reactions to these approaches, even though he brought up the fact that such equipment is not expensive and could be bought with very little effort.He used the logic that the donations to the temples were used to build sacred buildings for tens of millions of Thai Baht, whereas a sterilizer could cost only anything from 6 thousand to 50 thousand baht.

Some of the answers he got were; “The Buddha will protect from illness” (the author maintains that Buddha’s last lesson was his death, proving that even the Buddha was subject to death, illness and impermanence),or sometimes “if you believe in magic, then you shouldn’t worry about the danger, the Yant will protect you from that”.So it seems that the extreme faith of the makers and receivers of sak yant is preventing people from feeling the need to exercise the necessary hygienic precautions.

Whether the Yant really protect from such dangers or not is up to the person and his beliefs, however the author himself believes that hygienic measures should be employed, if only for the simple reason that the modern Thai government and current legislation may lead to the banning of sak yant because of unhygienic practice. In 2006, a group of school children were in the news again for receiving sak yant tattoos – this time the reason being that their tattoos had become seriously infected.

A big debate resulted from this case and was all over local News channels.This and other cases have served to induce a negative attitude from the Thai Government and law makers towards the practice of sak yant by monks and lay masters. Apart from the low hygienic prevention methods applied with the needles, a linen cloth is often used to wipe the blood off the skin, whilst the tattoo is being executed. This cloth is not thrown away after each tattoo, rather is used repeatedly on one tattoo-ee after another, the blood of previous tattoo-ees remaining in the cloth.

This cloth is rinsed out a few times a day and then washed once a very few days! Ink Pots; Once again, rather unhygienic in most places – the same ink pot is normally used, made from porcelain (the porcelain palettes used for watercolor paints), the same inkwell is normally used for all devotees, meaning that the blood of the previous tattoo-ees is probably swimming around in the ink.  Sometimes, plastic ink pots are used, which are low in cost and can be disposed of after single usage.

Some masters (the monk Hlwong Pi Pant, for example), do use more hygienic methods; tissues instead of the cloth, and plastic single use ink pots.The Author has often attempted to suggest fund raising activity to pay for sterilizing equipment and his preparedness to help in training how to operate them, this has been to no avail till now.

Before continuing the story of Sak Yant Tattooing, we should perhaps get acquainted with the Biography of Hlwong Por Phern, who has proved to be the standard bearer of Sak Yant tattoo, and is responsible for Sak Yant being as internationally famous as it has become today. Biography of Luang Por Phern >>>