This is a four-sided yantra and based on the four elements and the five-fold kata of the consideration of Asubha in the Human body – realizations achieved through meditation on Asubha (Asubha Bhavana) lead to liberation from clinging, and the wisdom-knowledge of anicca (Impermanence) as one of the three conditions of Tilakkhana (Impermanence /Anicca Unsatisfactoriness/Dhukkha and Non-Self/Anatta) – long consideration of the fact that the Human body is merely a collection of five kinds of substances, of a hard, soft or fluid texture, and also divisible as one of the four elemental states of solid, liquid, warmth and vaporous, leads to realization of the great truth of Tilakkhana (3 conditions) By realization, i do not mean that you understand the principle truths of the theory.. that is understanding but not intuitive knowing. if you understand only but then do not have aadti and Sampacanya (constant knowing awareness) then as soon as you stop thinking of these aspects and walk into the street and see a handsome man or a beautiful woman your senses will fall prey to this and your emotions will immediately become sub merged in fascination (Moha) with the object. realization means that you intuitively know this truth and shall never forget it. Once realized you will be free of all such illusions pulling you down into the abyss of desires and fascination in the physical world. 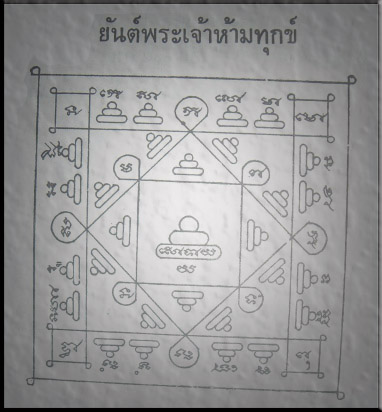 Continuing on this theme, i would like to add that apart from Sacred Yantra being such a phenomenon as far as amulets and tattooing is concerned, the real origination of the Yantra, was that they were designed by and for Yogis who used these as objects of kasina meditation (staring one pointedly at an external object). The study of the meaning and symbology of the Yantras, until attainment of Nimitta (the image becomes luminous and when the yogi closes his eyes he can see a mental projection of the object of exterior focus within his own mind), will lead to realization and activation of the magical properties of the Yantra within the psyche of the Yogi. In the case of this Yant for example, fixation on the design to attain Nimitta would enable the yogi to awaken the realization of liberation from attachment to the physical and impermanent and fascination with external objects through his understanding of the symbology contained within the design. Once a 3d luminous geometric yantra can be invoked and projected within the mind of the Yogi – an instant and intuitive self-realised knowledge of all the truths contained within the yantra will become immediately apparent upon invocation of the Nimitta in his/her mind.

These are like magical boxes (i think of them like glowing rubix cubes, kind of like the magic box in hellraise.. except positive ones not negative ones), or keys to inner dimensions of  jhana absorbtion. the deep inner knowledge which becomes present whilst absorbed in such an object of focus is like dwelling within an inner space which tells you great wisdoms.. It is impossible to put these wisdoms into words when you return to the normal state of consciousness after leaving the meditation, but whilst you are in there, you can see, sense and know exactly what is meant.. such truths as the ones contained in the Arupajhanas (formless states of absorbtion) are not possible to recount in the normal dimension of existence – due to the “normal state of Human consciousness being under the influence of Rupa and Nama (names and forms), which cannot encompass the immaterial realms.

Back Side of Yantra

In the front side it says “Gesa Lomaa Nagkhaa Tandtaa Dtajo Mangsang Nahaaroo, Adti (Hair, fur, nails, teeth, skin, muscle, mucous, and bone) – Na ma Pa Ta – So Taa Ya. There are other individual letters too such as “Na, Pa, Hang, and Ja, and Sadta Staaa (7 fold faith) – but these do not need to be recited – also the number two is inscribed within the yantra. The recital of gesa Lomaa nagkhaa Tandtaa Dtajo mangsang naharoo is the consideration of Agarn 32  (32 different physical constituents of living beings) the five main categories of these 32 are a reduced and more simple way of considering the physical body, and the fact the we are not our bodies, and also their transience (impermanence) and state of “Asubha” (dirty and undesirable) – this helps in detaching oneself from self cherishing and association with one’s physical body, which results not only in clinging to the physical world, but also to difficulty in leaving this world when death arrives

To recite the Kata for this Yantra i suggest the following;