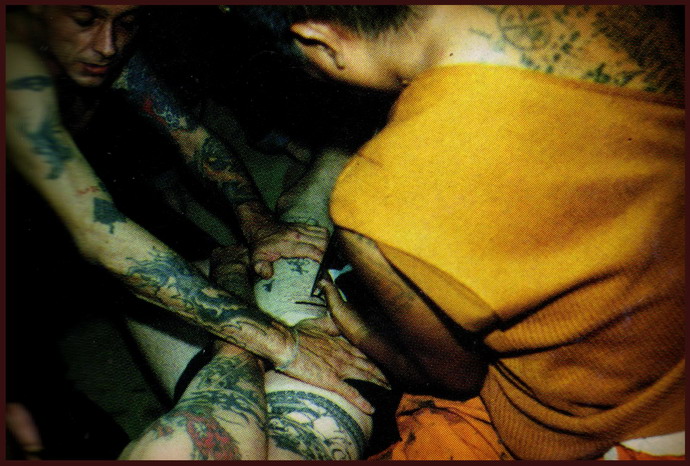 Assisting Luang Pi Pant to tattoo a Looksit – approximately 1998. This was the time when I began to seriously study the Yant and the sacred Agkhara lettering, for i had finally mastered Thai, and was able to obtain literature on how to read and write Khom. I simultaneously studied Pali and this enabled me to quickly recognized the hidden Kata within the Yantra, and understand their nature, and hidden power. This path of academic, spiritual and practical interest led me much further down the rabbit-hole of Thai Occultism than i first expected to travel, and till now has led me in two differeing paths, one being Magical and related to the Atta, and the other being truly Supernatural and to do with Nibbana and Anatta – The Thai Forest tradition of Dhamma Practice and my subsequent ordination for a time as a Buddhist Monk on forest wandering, gave me a true insight into the practice of Dhamma in the Vipassana Kammathana methods taught and practiced 2500 years ago by the Buddha Sakyamuni. Through the worldly academic interest of Sak Yant and Sacred geometry, i found my way to the true path of the Maggha, and can simultaneously practice both until the Maggha is all that remains.