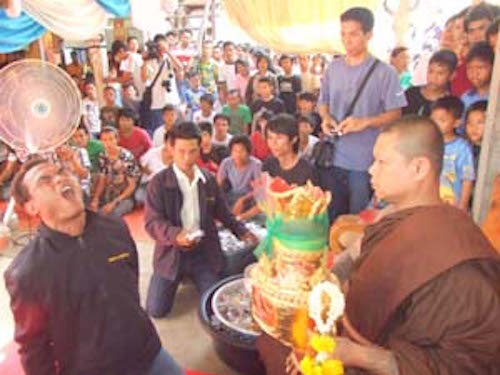 Ajarn Hlek Dam Dtechatammo is a Sak yant Master resident at Wat Nern Patanaa temple, Gong Tuul, Hnong Pai, Petchaburn the adress in Thai is below for you to print and show to Taxi or Coach driver in order to find your way to the temple in Ampher Hnong Pai in Petchaburn.

You can see his website, which is in Thai language only on the following url;
WEBSITE OF PRA AJARN HLEK DAM

Suad Paan Yaks Ceremony;
Suad Paan Yaks means to speak with the Yaksa Asura beings – this is an ancient Thai ceremony used to call upon the Asuras to chase away evil spirits and wipe out past bad karma. This ceremony is becoming less common in recent times, so oyu must really keep up with the current activities of the temples to be lucky enough to be able to participate in this ceremony. One place where you can see it is every February in Wat Tong Nai (the temple where Ajarn Thoy tattoos) in Bangkok – normally about the eighth to the 12th but it changes slightly from year to year. 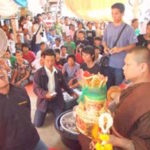 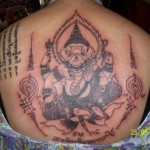 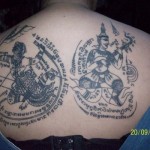 It appears that Ajarn Hlek Dam also performs this ceremony each year too so check at the temple for dates. Whether this ceremony is a pure Buddhist practise is something which i shall be discussing on the forums here, as it is something i wish to have explained so that people really understand what Buddhism, Brahminism, sayasart and Wicha Akom are about, and what distinguishes these terms from each other.

In whatever case, i really do recommend attending one of these ceremonies because you will witness some very amazing and strange phenomena, especially the Khong Khuen sspirit posessions as well as certainly feeling some very mystical vibes and energies i can guarantee you that you will sense the power in the air at least, if not get some strange things happen even to yourself.

Everyone attending will recieve the Taw Waes Suwan Yantra Cloth, to place above the doorways of their homes and protect froom all evil, and thieves etc. The ceremony is ,marked by the tying of “Sai Seen” (sacred prayer cord) above the heads of the devotees in a yantra grid form; The “Pha Yant” (yant cloths) with the image of the Asura King of the Northern quarter “Taw Waes Suwann” emblazoned upon it, is tied to these cords. The monks then perform the ceremony holding the cords and chanting the katas into the cords which vibrate with the power of the kata. The strings lead from the hands of the Monks through the Pha Yant in the ceiling grid and each cord with a yant cloth hangs down over each of the devotees, with the cord ending up tied around the head of the devotee so that you recieve the blessings and magical vibrations of the katas coming from the monks.

The Monks, before beginning will explain to you all that you must empty your minds and be passive, letting anything that might occur just happen and not to resist it. You will be warned that you may feel strange, and if so that you should let the feeling go as it wishes to, as this is your old karma, rising up, to leave you behind, and exit from your karmic aura.

People will start dancing and shrieking, some in a deep trance sit silently rocking.. some prancing and making kung fu like movements..

The different performances of the devotees in trance depend on their past karma and what needs to leave them.

Listen to an explanation and a recitation of the ceremony; Suad Pan Yaks