For me, there are a number of Fine Masters of Sak yant Photography, which has become a Genre in itself big enough to furnish the stage for the arrival of numerous coffee table and visually anthropological photographic works in book form. I would say there are also a lot of would-be sak yant photographers, who have little art or inspiration and use Photoshop sketch effect to insinuate a personal style of photography, i have seen a few of such type photographic ‘works’ all of which i myself can do on button push with Photoshop, and thus do not lend much value to.

The would-be’s followed in the Wake of the True Artist, whose work is inimitable and speaks for itself,  such as Cedric Arnold,  Martyn Goodacre, and JP Candelier, whose work most of us are now familiar with, as well as the newer appearance of the Book ‘Sacred Tattoos of Thailand’, a  Semi Anthropological, Semi Urban Sub-Culture Photographic Documentary on the various Social Strata to be found in the world of Sak Yant, written by Joe Cummings and Photographs by Dan White. In my opinion Sacred Tattoos of Thailand , is the only Photographic Documentation Book in Print to date, that is not a simple visual coffee table book. it is a valid insightful work with anthropological insights here and there, and very astute observations that take up angles you may never have thought of.

As i write this post, and fly off in another browser tab to find the Facebook fan page of this Book by Joe Cummings and Dan White, i read sad news on their Fan Page that Dan has passed away, and received his Buddhist Rites at Wat That Tong in Bangkok on 23rd and 24th September 2012. His Amazing Work remains for us to Appreciate, may we all think of him in our prayers and send Metta for his Journey upwards through the Celestial realms towards eventual Buddhahood, as we all wish to attain the same. 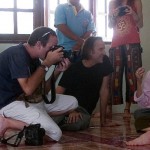 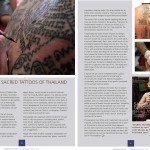 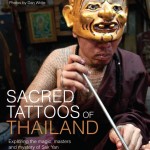 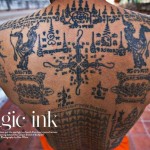 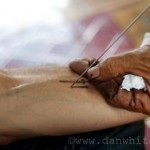 Close up of the Hand and Needle of Ajarn Kob of Ayuttaya – Photo by Dan White (R.I.P.) www.danwhite.org 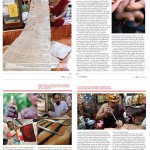 You can see the website of the book Sacred Tattoos of Thailand, and more about the Authors on the following Links;

Well, after that news,  what originally inspired me to post today, was a set of photos i have often admired by a Photographer who uses the handle ’13Maysa’ to stamp his or her Photos with. They are in my opinion of the best Sak Yant Photos i have seen as far as clarity, tonality, use of light and darkness and contrast are concerned, as well as how this photographer frames the areas of skin, or scenes within the photos.

[flagallery gid=7 skin=default name=Gallery]
Image Source;
http://www.oknation.net/blog/spyzaa/2009/01/26/entry-1
Maysa also makes a lot of other photographic essays and documentaries, which you can admire and enjoy here;
http://13maysa.multiply.com/

The works of Cedric Arnold in Sak yant are amazing, but Cedric has truly honored Sak Yant by his documentation, for he is a distinguished World Class Photographer who has covered a host of very High Ranking or Famous Persons and covered many Top Level stories.
[flagallery gid=8 name=Gallery]
Souorce; https://www.facebook.com/cedric.arnold.16

The same can be said for my friend Martyn Goodacre (Ex NME Photographer), who i was honored to meet when i journeyed to Luang Pi Pants temple with Maqi, a Globetrotting Bloggeress, and Suicide Girl who was writing a story about sak yant (one of the first people to cover the topic for readership in International publications such as Tiger Airways inflight magazine – this was already quite some years ago) Martyn is perhaps most famous for those Nirvana pics with Kurt Cobain.. or perhaps not, for his outstanding works are many. We have seen his works here on sak-yant.com before, in the gallery included below.