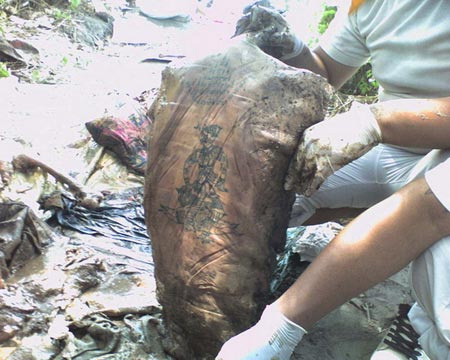 This Thai documentary “Rueang Jring Pan Jor” covers the case of a devotee of sak-yant who was shot at point blank range in his bed in nan province. Mr Sompet Intam tells the tale of Bulletproof magic, and believes that the miraculous fact of his survival is due to the fact that he wears sak yant tattoos from his Ajarn, “Pra Tapagorn Intachoto” (at that time still an ordained Bhikkhu), the abbot of Wat Phatub. 5 days after having recieved the yant, he was shot nine times with both shotgun and 38 caliber revolver at point blank range.

Since this event, the once abbot of Wat Pha Tub in Nan province has disrobed and has a small sak yant samnak in ban Pitileb Ban Panka, nan province. The documentary takes a shotgun to ballistics experts to test the possibility of such an even being possible for someone to survive such a barrage of shots at point blank range withoout the gunshots piercing the skin…
Watch the results in this documentary;

The rules of this Ajarn says; “Forbidden to cry or beg the assailant for mercy, and to not partake of intoxicants and keep the five precepts, – only do good and do no evil. If your enemy assails you, then concentrate on all things that are good and do not cry, scream or beg for mercy.