The heads of the Devas are topped with “Ongk Pra” (Buddha in Meditation), with sacred Unalomes over them. There is an encoded Kata hidden in three levels of writing between the criss-crosses that connect each of the five faces, which when deciphered read as such;

If you notice the third eye in the forehead you may realise that the styling on the faces of the Devas is that of  the “Pra” which are often seem in Lai Thai mythological art design, used for Devas, (Taep/??? – as in Taep Panom; the figures often seen in entrances with their hands placed together in reverence, and indeed also as a tattoo), but that the third eye represents the Brahmin God Shiva (pra isworn, in Thai).

Five is a sacred number for Shiva. One of his most important mantras has five syllables. Shiva’s body is said to consist of five mantras, called the pañcabrahmans. As forms of God, each of these have their own names and distinct iconography.

These are represented as the five faces of Shiva and are associated in various texts with the five elements (wind, water, fire, creative function and space), the five senses, the five organs of perception, and the five organs of action. Doctrinal differences and, possibly, errors in transmission, have resulted in some differences between texts in details of how these five forms are linked with various attributes. The overall meaning of these associations is summarized by Stella Kramrisch: “Through these transcendent categories, Shiva, the ultimate reality, becomes the efficient and material cause of all that exists” 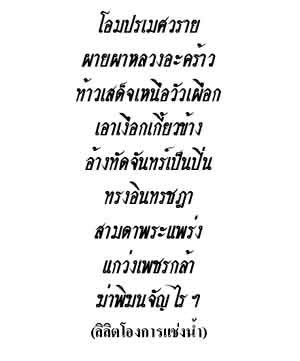 For Pure Buddhists this Yant can be seen to mean the five Dhyani Buddhas, and thus one can use their respective katas – or at best use the Kata found inside the Yant itself;

The Brahmin Way would be as follows;

Another Kata can also be; 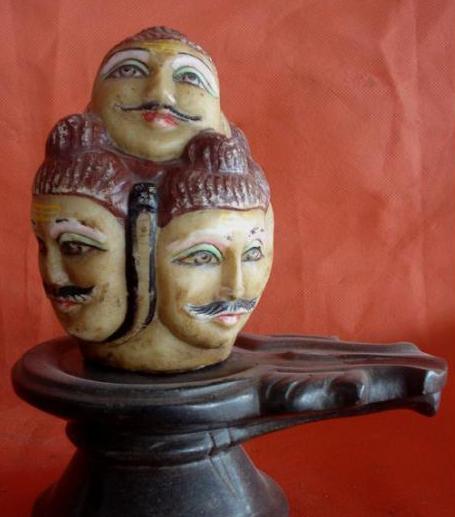 Pic Left; Five faced Shiva image on a ritual base for pouring milk over. Sculpture made by Yogesh Agrawal.

Shiva is fivefold, his five faces being Ishana, Tatpurusha, Aghora, Vamadeva and Sadjyojata, and eightfold (see puja below) as the eight directions. Shiva-Shakti also have a form called Ardhanarishvara, the meditation image showing the devi as red coloured and voluptuous, as one half of the body, the deva as the other half having a terrifying and fierce aspect.

Mahadeva Shiva is also lord of all beings of the underworld, including bhutas (elementals), pretas (ghosts), and pishachas (flesh eaters) and the rest. He is sometimes pictured on a horse, followed by his retinue of siddhas (accomplished ones), bhairavas (terrifying forms of Shiva), yogis and the rest. As Rudra, he is identified with the star Sirius (Sothis), and is the supreme hunter.

The lingam used in Shiva puja is often made of different materials. While the Todala Tantra recommends lingas made of clay, they are also fashioned from quartz, stone, and in the case of the Matrikabheda Tantra, an alchemical work, from a Mercury amalgam.

Five faced yantra also can mean the life cycle, and in addition, the kata Endings of Buddhist mantras (Ma A U, which mean “Sangha, Buddha and Dhamma” in Buddhist mantras) also have a meaning in Brahminism ;

Shiva is called Om which represents the five elements of the process of a life-cycle. Om has three sound elements which give the sounds of vowels, such as ‘A’, ‘Ou/U’ and ‘Ma’, and two physical elements, such as a ‘dot’ and a ‘crescent’. ‘A’ represents birth, ‘Ou’ life, ‘Ma’ death, ‘dot’ disintegration of the body into original five elements and ‘crescent’ the soul moving to another physical body or returning to merge with the Supersoul. In the human form, each element of this life-cycle process also represents one face each of the five faces of Shiva. Therefore, Om also stands for Shiva and denotes the Universe.

Shiva is depicted as a five-facad form to represent these five elements that support life on earth. Each face has three eyes, which also represent birth, life and death.

Shiva appears as a luminous lingam. Although it has a special form, the Lingam is considered as a formless and infinite object representing the Lord as the universe. The base of the object representing ‘Ou’ is considered to be ‘Om’ which depicts the Lord and the Universe. Such a set is worshipped as Shiva everywhere in the Hindu world. The lingam also is believed to have five faces. Four faces are usually carved on all four directions and the fifth, which is not carved, is believed to be facing upwards. 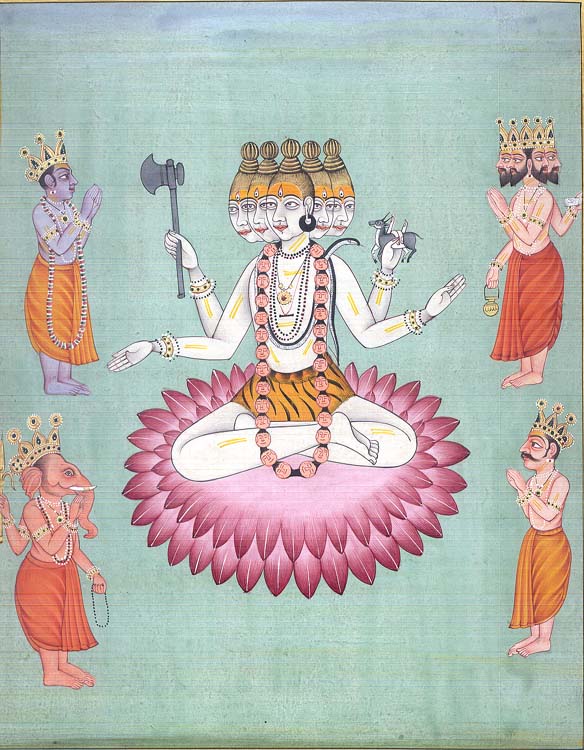 Om. Meditate always on Mahesha, like a mountain of silver, with a beautiful crescent Moon as his crest-gem, whose body is as bright as a jewel, gracious of appearance, his hands holding axe, deer, bestowing boons and dispelling fear, seated in the lotus position, surrounded and praised on all sides by immortals, wearing a tiger-skin, seed and sprout of the Cosmos, destroying fear, with five faces and three eyes. (Place a flower on the head. Perform mental worship. Place the flower on the linga.) O Bearer of the Staff, enter herein! Indwell here! Reside here! Reside here! May happiness be here! May happiness be here! O Rudra, I perform your worship!

Nam Nam Nam! I know not how to invoke, nor how to worship, nor how to bid you farewell! Forgive my mistakes, O Parameshvara. (Place flower on head. Close.)