Turtle Yantra, luck, long life, good health, good fortune – also kong grapan and klaew klaad due to slipperiness (klaew klaad) and hard shell (Kong Grapan) – Long life is insinuated due to the long lifespan of the Turtle. Metta, because of the Turtle’s pleasant and non-agressive disposition. This Yant has the elemental qualities of both Water and Earth, due to the amphibian reptilian nature of this creature. Most reptilian creatures will have Kong Grapan qualities. But not all amphibians (such as the salamander) are reptilian, so don’t be too assuming. 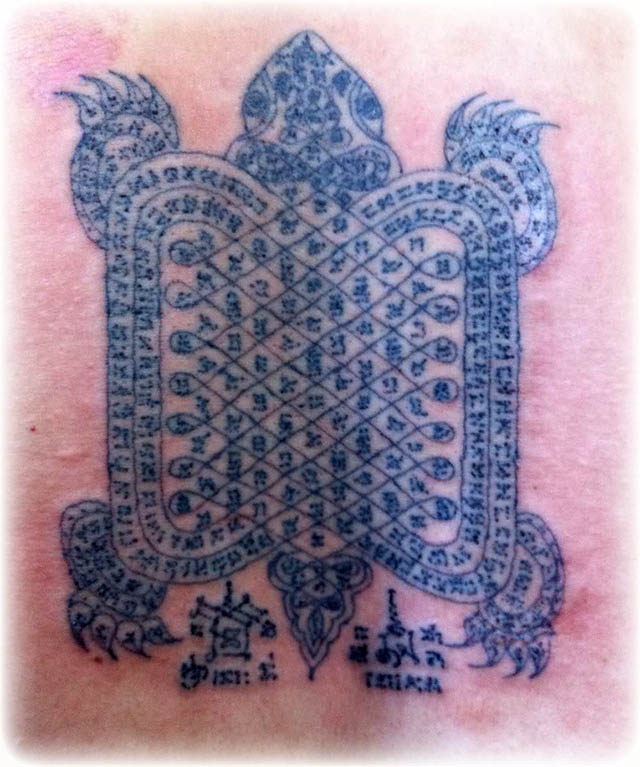 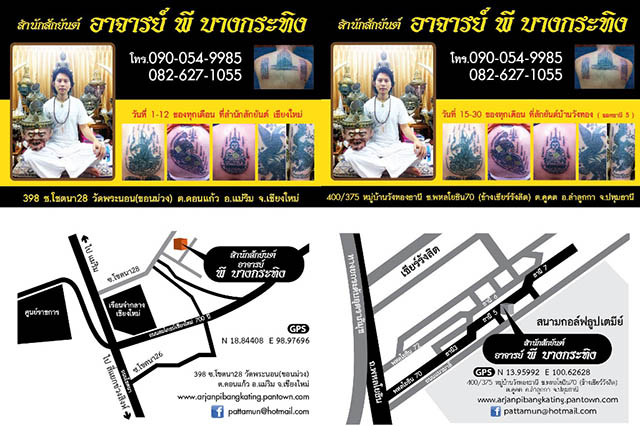 The first thing to perhaps mention about Thao Ruean is that it represents a previous incarnation of the Buddha, or, if you are Brahmin, then a past incarnation of Pra Naaraayn (Vishnu Avatar), where the god Vishnu was born as a turtle to stop the demon Hirantayaksa from rolling up the surface of the earth to prevent the Human Race from having anywhere to live.

This Yant has so many different applications; You can inscribe it on a cake of face powder and use to powder your face with; Even if your Boss is extremely angry with you – his anger will disappear immediately.
Use it to powder your face before entering a Court Case, and our opponent will be silenced.
Inscribe the name of the persone desired to be affected by the yant in the place where the letter “Pu” is (The centre square) write the person’s name first, then the letter Pu on top of it.

If you wish to use this Yant to help you in an Exhibition/competition, inscribe the Yant on a sugar palm leaf along with the name of the targeted person.
Place the yant under running water (such as a stream, fountain etc).Our opponent will be useless against us. 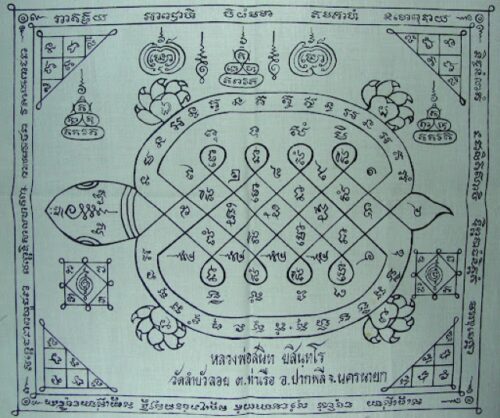 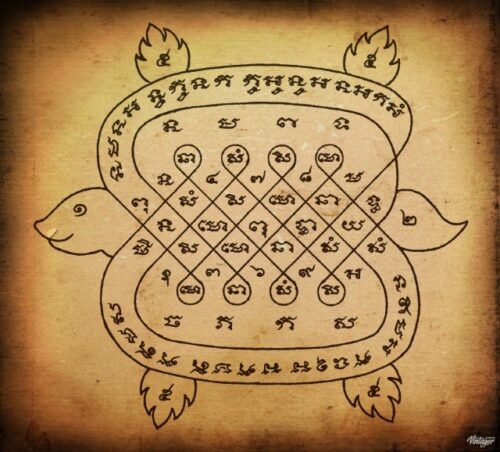 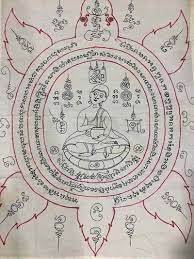 Another application is as a love charm; Inscribe the Yant on a sugar palm leaf along with the name of targeted person. Use the leaf to roll a cigarette with, blow the smoke towards the person we wish to lure, and they will fall in love with us. If there is a matter to be solved inscribe Yant Paya Tao Ruean on candle paper (sai tian) and write the name of the other person/people involved, plus the name of the matter to be solved (write all over the Yant). Use the paper to wrap a candle with and light it:- Chant the kata until the candle goes out, take the ash residue from the candle and mix it together with some cooked rice (using your hand).

Make 3 cakes out of it. Give the rice to dogs to eat and chant the following:- 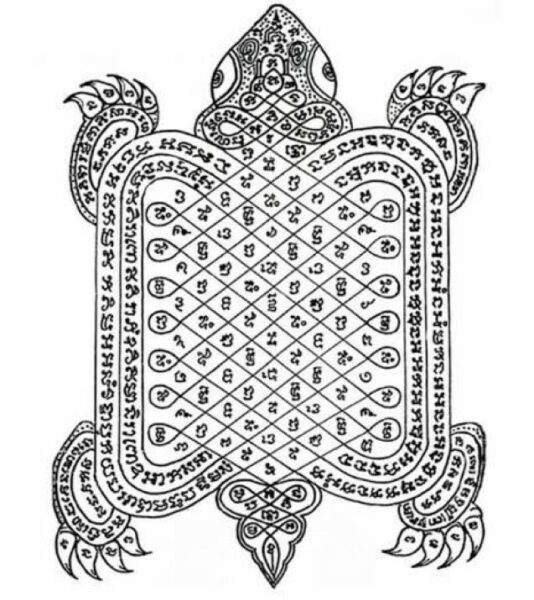 If it is a very serious matter to be dealt with; inscribe the Yant on paper along with the name of the other person involved. Rol the Yant up and stuff it in the mouth of a “Pla Duk” (Catfish)
Take the hair of a corpse who died a violent death or drowning and use it to sew up the mouth of the catfish (use exactly three stitches to sew it up)

Chant the word “A” three times whilst sewing.

Pierce the catfish with a skewer and roast it on a grillfire whilst chanting the following;
Pla Nan Pen Yang Rai, Khor Hai Man Pen Yaang Nan Terd

Once the fish is roasted, give it to a dog to eat. You can give the dog one fish a day for three days and your problem will disappear.

If your employer is angry with you; Inscribe the Yant on candle wrapping (thin paper) along with your employer’s name.
soak it in perfumed oil and light the candle in the same manner as one does when praying to Buddha. The person targeted will be unable to be angry with us. 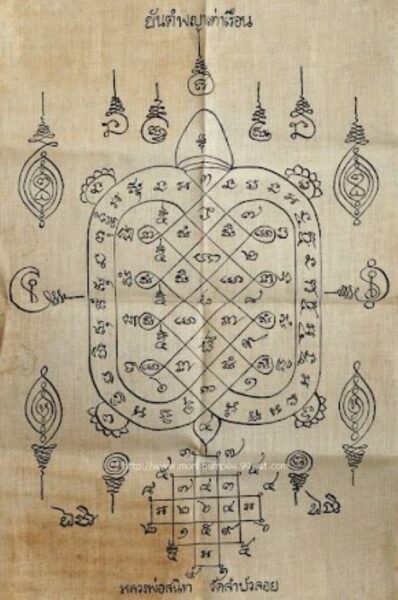 If someone is making accusations (legal for example), take the yant on paper and stuff it in the mouth of a “Khong” seashell (a kind of clam). Close the lid of the clam again,and bury it in a graveyard. Whilst burying the clam shell, chant the Kata for Pyaa Thao Ruean 15 times. Take some whiskey, cooked rice and offer it to the lord of the graveyard (presiding spirit), and slowly cover the hole with earth and sit on top of it. Chant the kata another 108 times. Concentrate your mind to see all things returned to normal and well and no cases against you.

Our accuser will be powerless to speak out against us.
If you wish to make some powder for Yant Thao Ruean, then you should take dinsor powder (chalk) and mix with the following herbs (known as “Waan” in Thai);
Rakson (7 sprigs) Ga Hlong (7 sprigs)and sawaat (7 sprigs) – pond them to a fine pulped powder. Take 16 skulls of humans that died violently or murdered (hard to find these days on the local market), ofer them to the spirits and then scrape them to powder and mix in with the mixture already made.and give it to someone )can be man or woman) to eat.

If you are competing in an exhibition or test or competition of some kind, inscribe Yant Payaa Tao Ruean on a sugar palm leaf. Inscribe the name of our competitor in the middle and the letter Pu in khom on top of it. Place the Yant under running water (a brook,stream or waterfall for example). As the water flows overLeaf, our competitor will become weak and powerless. 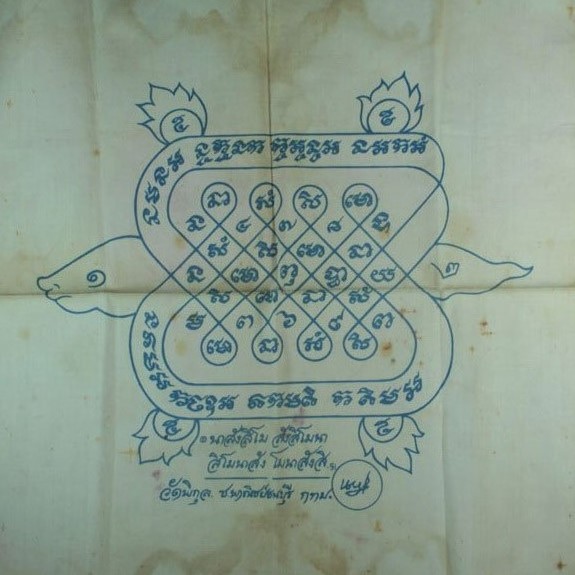 Yant Maha Tao Ruean can also be inscribed on a Banana leaf, rolled up into a cigarette using “Yaa Sen” (a thai tobacco alternative). Light the cigarette and blow the smoke towards the person we wish to charm; they will fall in love with us increasingly. (Please take heed that if you use a love charm on somebody and it works, there is a very strict rule you have to follow; namely that if the spell works you must never break up with him/her! If you make them love you they will be unable to live without you. Throwing that person away may lead to them killing themselves, or at least undergoing pain and sadness more than the normal level that humans can usually withstand! so please be very considerate towards your newly gained lover if you use this kind of spell. abuse of a love spell on a person will bring you extremely bad Karma. 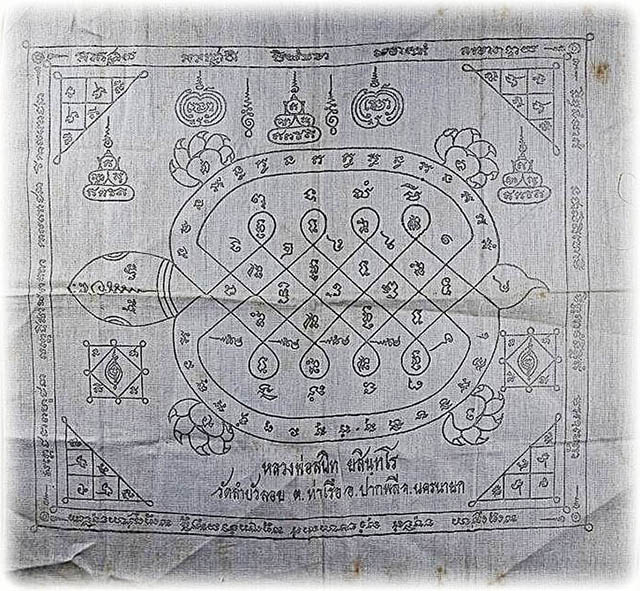 Use this Kata Chant for chanting into face powder – when you powder your face, it will be a “Jang Ngang” spell. Chant the Kata into the Turtle Yant – whilst doing this, you should pray the following;
“When Lord Buddha was incarnate as a Turtle, the Lord Buddha helped the Human reace with his compassion – let the merit of Tao Ruean (the Turtle) and the Buddha assist me in sipping the clutches of Suffering.

Kata in the knots of the Yant say;

Kata Pong Payaa Tao Ruean as a spell against enemies;

Chant the following into “Pong Tao Luean” powder, and give it to your enemy to eat (mix in his/her food) – the victim will succumb to madness..