Yant Ha taew has differing Katas with many masters, and is often especially composed for each particular person’s destiny/Fate. But in general, there are 3 or four main versions which are used in most cases.

The tattooed version should of course, stands vertically, instead of horizontally (as shown in this page, i laid it on it’s side for those who wish to study the Khom Script). In addition, it should have the Sacred “Unalome” (zig zag spirals at the end of each line), that are commonly used with all yant as a finishing method.

This is the Version used by Ajarn Lao (Singapore-Thailand) 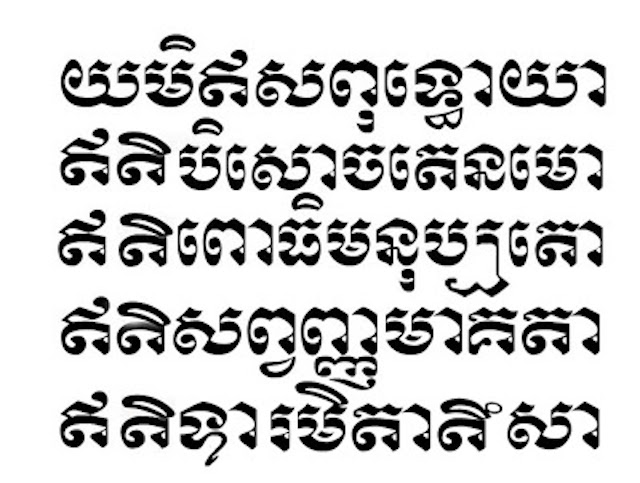 Tattoo of Yant Ha Taew below is made by Ajarn Lao – Ajarn Lao is currently unavailable as he has apparently ceased to appear in Singapore at the Fo Guang hang centre, and his Thailand location is still unknown. 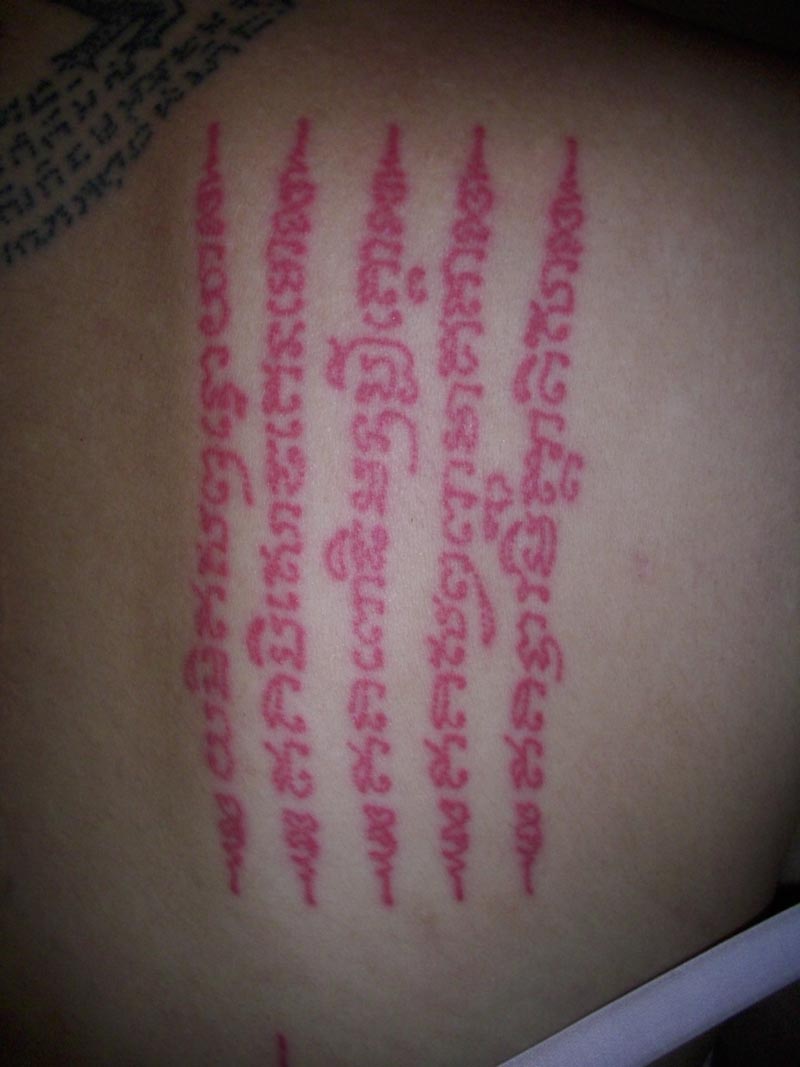 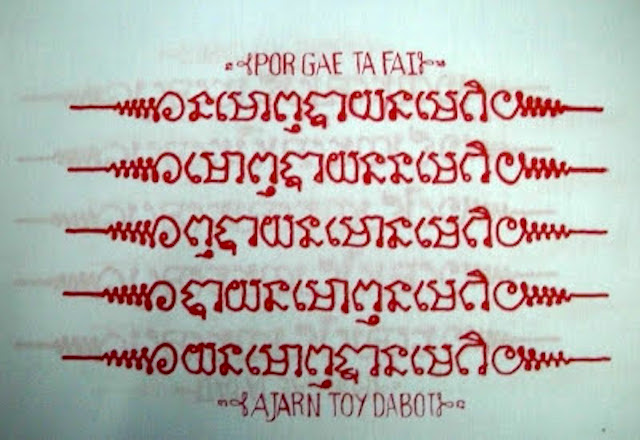 This tattoo of Yant Ha Taew above, is the version by Ajarn Thoy Dabos. It is slightly changed into a personal adaptation too as far as the Kata goes. This Kata should be practiced forwards and backwards in order to develop an intense concentration of mind whilst invoking the Kata. A clear understanding of the Magickal correspondence to the meaning of the number five is also required, as well as the study of the five Dhyani Buddhas and their corresponding Meanings/Aspects.

It is basically a repeat of the same line of Kata but beginning one syllable to the right on each new line – this means that you are running through all possible ways of saying the Kata with repetition until you lose sight of which syllable is the beginning, and which the last one.. this is intentional in Kata practice, in order to lose sight of the perception of beginning and end; this results in a lessening of the dualistic viewpoint and loss of the need to know which came first (the chicken? or the egg?). One part of what Buddha’s Dharma teaches us about the Illusory world of Maya we exist in, is that the dualistic mind that clings is what holds us from perceiving the eternal and infinite – there is no answer to the chicken and egg question, it is our need to find such an answer that causes our suffering. In most cases, when you learn Kata for Yantra magic, you must learn to say them forwards, backwards and sometimes even in other ways too (like squares, or the yantra with lines crossing through them as in Yant Grao Paetch (Diamond Armour Yant).

Yant Ha Taew – Five Pillars, or Rows Yantra, as made popular by the Actress Angelina Jolie, after visiting Ajarn Noo Ganpai to receive this yant.   The design below  is basically what the Yant Ha Taew from Ajarn Noo Ganpai looks like, but don’t go rushing to your artist with a printout of this to copy, as the Kata are deliberately shuffled around leaving a few of the consonants and syllables disjointed and out of place.

This surely renders the Yant useless/Harmless, and is therefore not desirable to copy. I suspect, apart from being shuffled around to make unrecognizable the Katas, this version from Ajarn Noo on below, is most probably using Khmer Kata more than Thai Buddhist Sutras, as i find the whole text intelligble, and know enough Pali and Sutras, as well as Kata to be probably able to decipher it if it was of Thai Tradition. 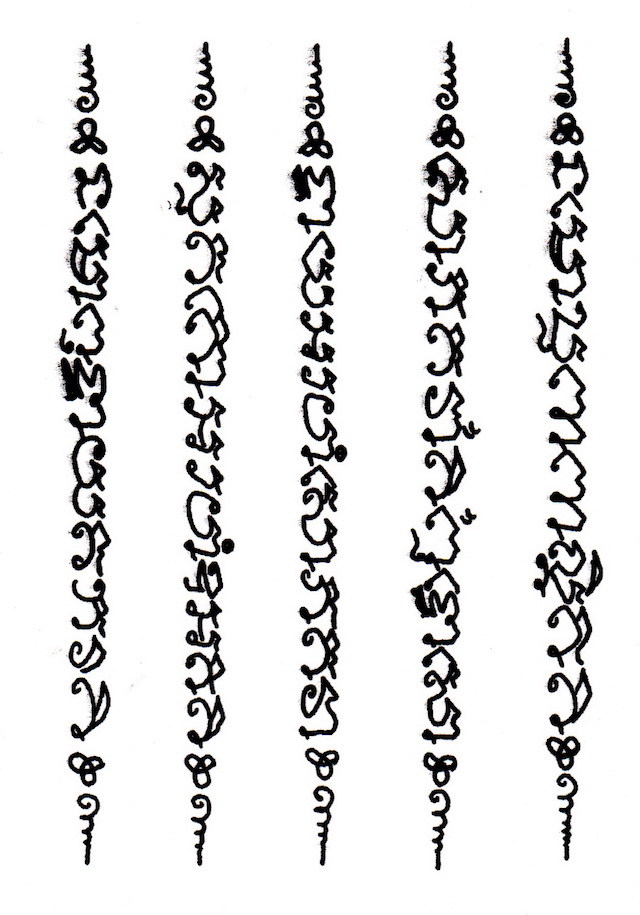 I conclude it to be therefore, probable Khmer Origin as far as the syllables are concerned. It is perhaps also possible that he wrote it wrong deliberately as this has been rumored to happen at his samnak, in order to confuse copycats. The first row prevents punishment in court cases, and cleans and protects your abode. Second line reverses bad horoscope constellations and bad Karma, third row protects against black magic and curses – fourth line is for luck and fortune, and success in one’s projects – fifth and last row is an attraction charm to make you attractive loveable, and also boosts the luck and fortune already laid out in the 4th row kata, and prevents curses as in the 3rd row kata.

The Yant Ha Thaew is designed to improve your Karma and Line of Fate in five different aspects of life. 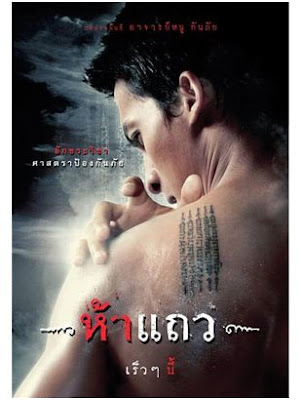 A movie was also made about the Yant Ha Thaew and its powers, with Ajarn Noo as on set advisor.