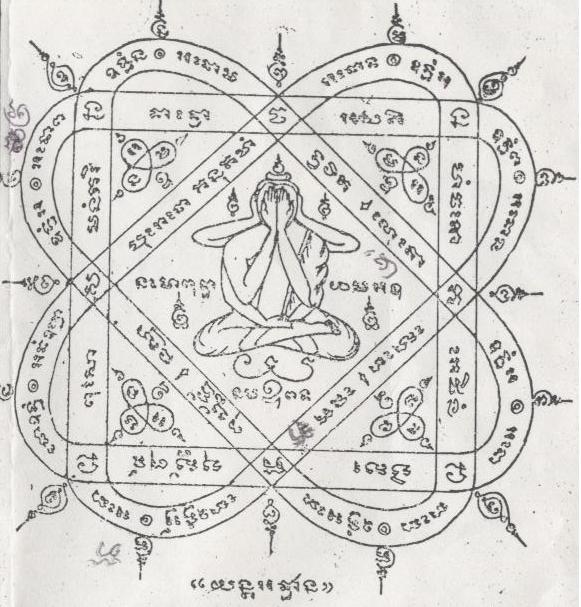 This Yantra is a variation of Yant Prajao Khao Umong/ Yant Prajao Khao Nirote – I like to call it Yant Pra Pid Tawarn. The Monk image in the centre has an “Ongk Pra” (buddha’s image) on the head, and is covering all orifices of his body with his six hands.

This is representative of various factors;

1. Avoidance and abstention from Evil (as in see no, hear no, speak no evil)

2. Maha Ud Magic (great stopper spell) – Blocking of all possible penetration – this can mean by weapons such as sharp blades or bullets, and also blocking of black magic spells and evil influence. The basic geometry of the Yantra is an eight sided Yantra in the form of a knot (similar to yant Look Takro). This can represent the eightfold path as the safe way to samutaya (escape / end of suffering) and acheive Nirodha (“nirote” in Thai). As to the Kata contained within the design, there is a repetition of Maha Ud heart mantra in various places indicating that this Yant is specifically designed to keep one centered in one’s spiritual path and precepts and to be protected from all obstacles or distractions and evils which might bring one to stray from one’s path. Pra Pid Ta/Tawarn images all Possess the Powers of Kong Grapan, Maha Lap, and Pokasap Magic.

The four triangular Yant  in each corner of the Yant in the top Image are also a kind of Maha Ud Yantra, and in addition represent the triple gem (Buddha Dhamma and Sangha), and the Primordial sound of “OM/Aum” (the Kata says “Ma A U” – Ma means Maha Sangko (Sangha) A means “Arahang” (Buddha/Arahant) and U means Utamadhammo (Dhamma) – in addition M+A+U can be used to form the word A+U=M = AUM (OM) 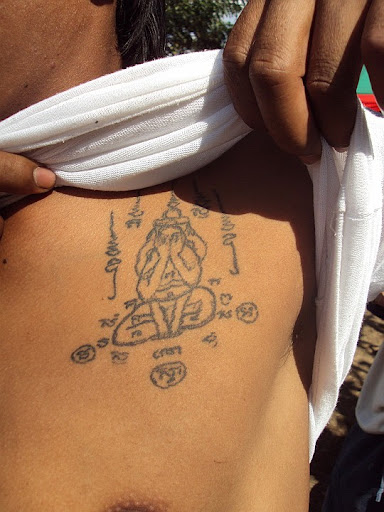