This post includes a Video playlist of the Wai Kroo Ceremony at Wat Tam Faed in Kanjanaburi. The abbot of this temple, Hlwong Por Wachira, is one of the present day’s most famous Masters of Sayasart (Magic). This temple was made famous by Hlwong Por Samrit Kampiro One of Thailands Great Magic Monks, who recieved initiation of the Wicha of Lek Lai, and was able to extract many forms of Lek Lai from where they were concealed withing lava stones, rocks and caves, using his concentrative mind powers and magical Kata to coax them out, whilst requesting permission from the guardian spirits of the Lek Lai.

Lek Lai is a mysterious phenomena and considered a very powerful magical element (Gayasit), which enables the owner/holder/wearer to be invincible to bullets, and other weapons, avoid accidents, illnesses and even attain mystical Psychic powers such as the ability to teleport, become invisible, and even levitate. Lek Lai is one of the cherished posessions of the Ruesi, who use the Gayasit properties of the Lek Lai to enable their psychic abilities and focus their power. A piece of authentic Lek Lai is precious almost beyond measure, sometimes costing between 70 to 100 million Thai baht for one baht weight of the substance (Baht, apart from being a monetary unit, is also a unit of weight measurement – i am not sure but i think one baht is about 225 grams)! 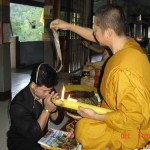 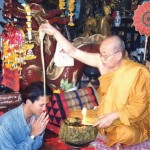 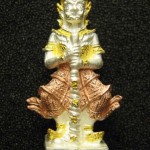 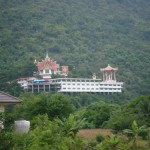 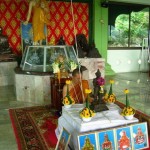 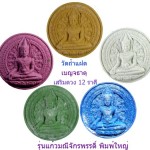 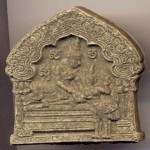 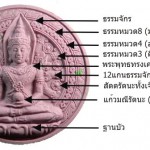 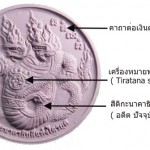 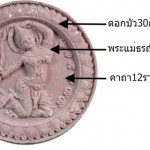 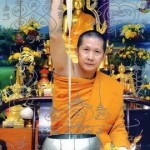 I was lucky enough to recieve one small piece of lek lai which i keep to this day – i recieved it under strange circumstances but choose not to divulge the details of the event. You can see a short documentary video in the clip below the video of Wai Kroo Wat Tam Faed at the bottom of this post.
Apart from the Wicha of Lek Lai, Hlwong Por Samrit was the first ever Master Monk to perform the miracle of “Nam Dta Tian” (candle tears); The ritual is performed by drippiing candle wax into a bowl of prayer water and then pulling the wax out (which, instead of being hardened as is normally the case when dripped into water, is elastic and gelatinous) ina long string, and dropping it onto the head of the devotee in a spiral. This ceremony is called “Korb Mongud Prajao” (laying on of the Lord’s crown). Hlwong Por Samrit left sangkhara and the five khandas (passed away) in 2539 at 20:30 at the age of 72. He was placed in a glass coffin, where his body remains in perfect state without decomposure. But before he passed away, he was able to pass on the Wicha of Nam Dta Tian to his prime disciple Hlwong Por Wachira – who performs this ceremony (miracle?) regularly. This ceremony has become extremely talked about and popular with Thai devotees who travel from all over to come to recieve this blessing. The candle tears which are placed on the head of the devotee is then placed in an amulet press and turned into an amulet, which is then given to the devotee. You can see this ceremony in the second video (Lek Lai) below towards the end of the video.

Below Video;Thai Documentary on Lek Lai, Hlwong Por Samret, and Hlwong Por Wachira of Wat Tam Faed temple
Lek Lai has many variations, ranging from rough to smooth in texture, green, gold, black and even rainbow colors are to be found. There are about seven main categories of Lek Lai, which are alleged to posess varying properties as well as priceing. Please be careful if you are interested in obtaining some as an amulet, as (ifyou believe the legends), it is not really possible to buy, rather, you wil recieve it automatically when your baramee (merits) is sufficient. Lek Lai isnt something you can seek out and buy, it coomes to you, and supposedly can perform uncanny feats as in the case of Buddha relics; grow, split, disappear or reappear…
It is said that if a piece of Lek Lai is held by the wrong person, then the Lek Lai will mysteriously vanish. It will aslo appear in just as strange a manner and enter the posession of whom it chooses to stay with.
If you have attained merits and developed psychic power then the Lek lai will be attracted to you like an electromagnet. Some people say that Lek Lai is used to make Nuclear Warheads, and that this is one reason for it’s high price value. I am not so sure about this, it sounds like more of a common folk tale.. but please decide for yourselves on the truth of the matter.
In the below video, a tale is recounted (with photo stills) of a devotee testing a piece of lek Lai using a loaded gun; The devotee lights incense and asks the Devas and angelic intelligences guarding the Lek Lai for permission to admire the power and merit of the Lek Lai by testing it’s power. He then proceeds to shot at it from a distance of about one and a half metres. The first three shots do not sound and no bullet leaves the barrel of the gun – upon attempting to fire a fourth shot, the person appears to fly through the air and lands on the floor as if kicked by a horse – the gun did not fire but the person recoils.
Perhaps this was the guardian of the Lek Lai saying “ok you have seen enough! dont test me too much”???