The Mon Tradition is rather lesser known but still in existence, with a few remaining Ajarn trying to maintain the tradition, which may now have a chance of survival and re-growth due to the current flare in popularity with Sak yant Tattooing.
Mon Agkhara lettering is different and influenced by the Burmese lettering.

The Sacred Agkhara lettering used in sak yant tattooing (and all forms of Yant magic), exists in various forms. Amongst the most popular forms of Lettering are the Khom, Lanna and Mon letterings. Most people have only heard of the Khmer lettering, but in fact there are Traditions from various Cultures around Thailands borders, which use varied Agkhara and have their own Pantheons of Deities and imagery. 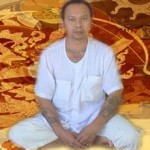 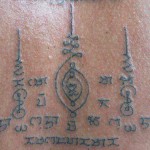 Sacred Na designs form the ‘Yant Kroo’ of this master 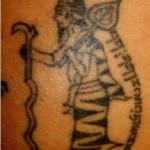 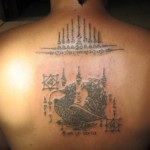 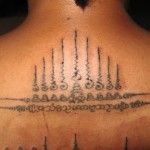 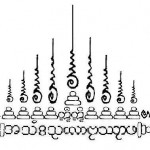 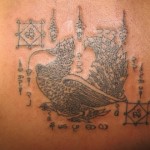 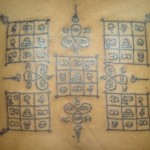 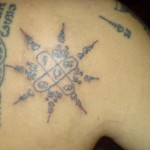 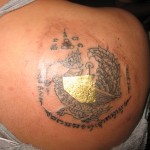 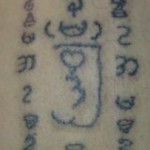 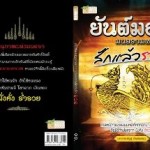 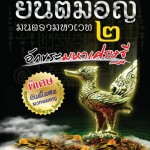 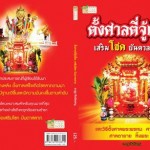 [ad#thai-guides]You can get Mon style sak yant tattoos from Ajarn Uea or Ajarn Neng as well as i think Ajarn Nuad (not sure, but he’s from Kanjanaburi so he may be well familiar with the Mon Wicha too. Ajarn Neng can do both Mon and Khom style Yant i have heard (and seen visual evidence).

It would be good to increase the demand for this tradition in order to help its survival in the future, so for those who wish an unusual addition to their Pantheon of sak yant, it would be a good idea to ask your masters for a Mon style Yant, for posterity. I shall be covering the Mon Agkhara Lettering in my second and much more academic book on Sacred Thai Yantra design, Meaning and History; “Kampir Yant 108 – The Sacred Geometry of Yantra”. The book will not be focused on Tattooing and the Ajarns who make them (for which there are now enough publications about for this purpose)

Where to Find Ajarn Neng

You can obtain up to three books in Thai on the Mon tradition by Ajarn Oot, who is the standared bearer in the moment for writing information on the Mon tradition of Sacred Yantra, and Mon Magical Traditions.
See The Authors Facebook Page; Ajarn oot (Yant Mon)[ad#thailand-amulets]